In Dussehra Festival in India, Fairs and Festivals, festivals in india by Unknown // // Leave a Comment

Dussehra is one of the most important Hindu festivals celebrated all across India with great pomp and gusto. This festival celebrates the victory of good over evil and marks the occasion in the great Indian epic Ramayana when Lord Ram, the good kills Meghnath (Lord of the moon), the bad and Ravana (Of sun race), the ugly to rescue his captive wife Sita.

Did you know that we have mention Dussehra as one of the top reasons to travel in India in October.

The name of the festival is etymologically derived from Ravana. Since Ravana, the wise (he is referred to as great Brahman by his adversary Ram) had 10 heads - which according to the epic Ramayana, he earned from Hindu God Shiva’s blessing - the  killing of Ravana meant the defeat of the one with 10 heads hence the name Dussehra (Das meaning 10 and hara meaning defeat). 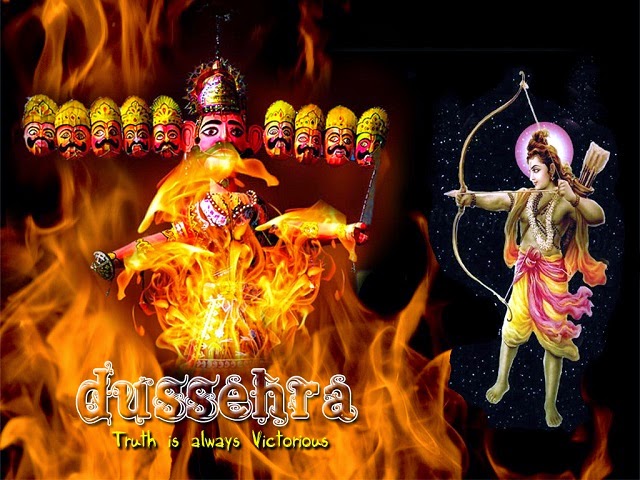 In India, the festival is celebrated on a large scale in different parts of the country. The manner in which it is celebrated is different all across the country. As the place of its celebration changes in the country, the celebration type also changes. While it is known as Durga Puja in Kolkata, it is Dasara in Mysore and Navaratri in Gujarat. The varied style of celebration makes it the most loved and popular festival. This colorful festival has much more to it which is further discussed in our following segment. Most popular places for attending Dussehra in India are Kullu in Himachal Pradesh and Mysore in Karnataka.

Flipping back the pages

Dusshera is a festival which is celebrated in the country from years. It is important for all to know the significance of the festival. We hope that this helps you in knowing about the history which makes us celebrate this festival today.

According to the Hindu religion, on the day of Dusshera in the Treta Yug, Lord Rama killed demon Ravana who abducted Lord Rama’s wife Sita. Lord Rama along with his brother Lakshmana, Hanuman and an army of monkeys fought a battle to rescue Sita. This entire story is recorded in the epic Ramayana. Lord Rama prayed to Maa Durga who blessed him and gave him knowledge to kill Ravana. Lord Rama and his team defeated Ravana on the day of Ashwin Shukla Dashami.  The day later was termed as Vijaya Dashami. From then, the day is celebrated on a grand scale to remember the victory of good over evil. Huge effigies of Ravana, his son Meghnath and brother Kumbhkaran are burnt on this day. All this is done to signify the end of evil.

Navratri festival precedes Dusshera. Navratri is a festival where Maa Durga and Lord Rama are worshipped for nine days. With the coming of Dusshera, people start cleaning and decorating their homes with beautiful items like flowers, leaves and bead strings. Puja is performed on a large scale to seek blessings of Maa Durga and Lord Rama.

One main ritual of Dusshera is Ravan Dahan. Ten heads of demon Ravana are burnt which symbolize the evil inside a human being. By burning the effigies, people pray to get rid of all these evils:

There is one more ritual as per which, people worship their weapons, pens and other instruments. All these things act as a symbol of fighting injustice.

Dusshera is celebrated on a large scale in:

Dusshera Mela is organized in different parts of the country to add to the celebrations of the festival. The Mela is a complete riot of colors where people come with their family and friends to enjoy the festival. The Dusshera Mela houses a number of well-decorated shops offering local handmade items, food and toys. Cultural performances are given by different artists to entertain the public. Dancing competitions are also organized for the public where families perform together. At the end of the festival, effigies of the demons are burnt which is followed by feasting.

Dusshera is considered the most auspicious day of the year. Those who wish to start a new venture, choose this day with a wish to get success. The festival is a part of a long celebration which starts from Navaratri to the tenth day- Dusshera and Diwali which is celebrated after 20 days. The festival brings in with it a lot of colors, celebrations and happiness which is enjoyed by all.
Truth is always victorious! Celebrate the victory of good over evil this Dusshera.