In Night Tourism in Jaipur, Rajasthan by Unknown // // 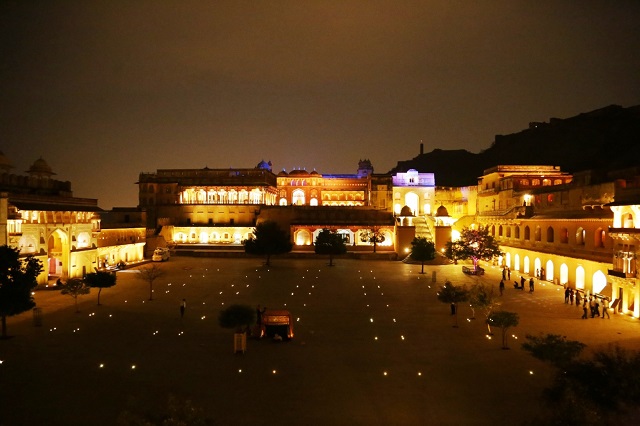 The idea of night tourism has been introduced in Jaipur by The Rajasthan Tourism Development Corporation (RTDC). The concept has been introduced for the first time in the state and Jaipur is the first city where it has been launched. This exclusive tour is going to include important tourist attractions such as Jal Mahal, Amar Jawan Jyoti, Birla Mandir. Vidhan Sabha Bhavan, Albert Hall, Amber (Amer) Fort, Hawa Mahal. The tour will come to an end with a special dinner at Durg Cafetaria at Nahargarh Fort.

Joint director, department of tourism, Government of Rajasthan, GS Gangwal, informed, “The night tourism concept was introduced during this summer. Due to the heat during the day tourists do not prefer to visit the attractions. This is when we came up with the concept of night tourism, where travelers can visit the major attractions in the evenings from 6 pm till 10 pm. This new tour concept is slowly becoming popular amongst travelers. Initially, we started this tour to Amber Fort, Albert Hall and the City Palace, and soon we will be adding more attractions.”

12 Things We Bet You Dont Know : Secrets of Ladakh

Ladakh in the northern most stretch of India is a land of possibilities, nature’s extreme and religion. One thing that holds all these in one thread is the element of mystery. Over the past years, the mainstream world has significantly shown interest in this mystic land, but still have not been able to explore all of its faces. These enigmatic faces are usual to the locals (Ladakhis) and so are its secrets.

If you happen to travel to Ladakh anytime, try to hear out stories of all the below mentioned from a wise local. Well, these are some secrets of Ladakh which we, the mainstream world are completely unaware of:

The clichéd Kung fu image of the Asians, which we happen to tag with every chap having mongoloid features is somewhat true for the Ladakhis too. Although Kung Fu is not a part of the mainstream Ladakhi (Tibetan) culture, echoes of hee-yaas can be sometime heard across the hills. That’s right, there is one self-empowered branch of feminist Buddhism in Ladakh, Drukpa Nunnery, the disciples of which are known to practice the ancient Kung Fu at the very early hours of the morning.

Surprising fact is, these disciples are no martial art aspirants, but Buddhist nuns. Watching the Buddhist nuns, who are usually known for their peace loving nature and relentless towards any sort of violence, getting involved in an act of physical combat is certainly a rare sight in Ladakh.

2. In 1971, The War with Pakistan was Paused to Celebrate Losar

Who says military men can be no better than war junkies? I do not know about the most advanced Seals or Marines, but the men in uniform of India and Pakistan certainly proved this theory wrong. And that too at such a time when they were at their most ugly form against each other. Very few from either side of the borders know that the historic war in which their country took part four decades before, was put on a halt for some time, so that the locals, who were in the middle of such crises, can carry on with some festival in peace.

It was the 1971 war between India and Pakistan. Gunfires, grenades, continuous bombardments from the tanks were dismantling the Turtok village (in possession of Indian army) in Ladakh. Then suddenly, the then Commanding officer of that post, Colonel Chewang Rinchen got a conscious call, felt sentimental, and paused the war for some time. Reason being, Losar festival celebrations were about to start. I wonder how the other side fell for it and also stood at peace. The Losar festival continued for some days and so the ceasefire. Later on, the Colonel was awarded the Mahavir Chakra for his noble act.

One of its kind in the world is the Magnetic Hill. True to its name, the hill is known to defy gravity by pulling the cars towards it, just like a magnet. The mysterious hill is located on the Leh-Kargil-Srinagar national highway, at a height of 11,000 feet.

Locals of Ladakh have a superficial explanation about the hill. They believe that there was once a pathway (the highway connecting to the hill), which used to lead straight to heaven. Those who deserve heavenly pleasures are pulled right away by the hill, whereas who does not deserve are not.

However, modern minds take it as a nature’s phenomenon and believe magnetism of earth is the root cause of this attraction. Leh resides at one of the highest altitudes on Earth and receive the maximum radiation of the sun. This causes the magnetic pull, and fluctuations in the presence and absence of sun are bound to happen. That’s why, at the day time the magnetism is more intense than the night time.

Siachen is the highest and toughest battle field in the world. Since many decades, Indian army has made its presence to this inhospitable region, where mere survival itself becomes a challenge. Apart from the physical and mental agility, the thing that keeps them going is the unwavering faith towards a legendary soldier; the fellow soldiers prefer to consider him as their guardian deity. Legends has it that once a brave soldier named Om Prakash, single-handedly put a valiant fight against an enemy attack that took place at the Malaun post. In an attempt to safeguard the post, he laid down his life.

Today, soldiers posted there have a firm belief that the spirit of that martyr, commonly known as the ‘OP Baba’, protects the Siachen past against all odds, nature or enemy. Owing to this belief, they also made a sacred shrine of him, right at the basecamp of Siachen.

5. The Myth of Tso Kar Lake

Ladakh surely has a mystic charm that shines out from every of its wonderful spots. One such spot is the Tso Kar Lake, which is one of the highest and the most beautiful high altitude lakes in India. The lake is crystal clear blue with patches of white (salt) on its shore. Such amalgamation of colors make it a popular tourist attraction. However, the lake hasn’t been like this in the past, as the locals talk about its story.

The myth goes like this, millions of years back, Tso Kar used to be gigantic. There was a devil, who started with the task of drinking the whole of the lake. After a point, when he got totally full and couldn’t hold any longer, he ended up spraying all of it on earth. Some amount of it spluttered towards Korzok, which formed Tso Moriri, while the rest of the water gave rise to Starspapukh and Regul Tso.

One of the most important ingredients of Viagra, ‘Shilajit’ has its best quality origins in the Himalayan hills of Ladakh. In the cities, this precious natural drug, known to improve sexual stamina and libido is sold at high prices, but in the barren lands of Ladakh, it is available for free.

Just like rubber, this antioxidant oozes out from the rocks and is found in great abundance. However, if you come across such rocks, don’t just start scraping it off from the rocks because it requires proper processing to get the desired drug.

Being a border disputed region, Ladakh in the extreme north of India has military presence since many decades. Indian army not only protects the Ladakhi borders, but also safeguards the interests of the local population. As a noble attempt, Indian army has taken the charge of training the locals to build comfortable homes for them.

Environmental conditions at Ladakh are highly unpredictable and hostile. Thus, for the rural population to be independent, the men in uniform have started this endeavor. They also contribute in the local economy by supplying fruits and vegetable at the time of shortage.

Many of us, especially the bikers who take Ladakh as an ultimate sojourn for off-road biking trips, would have been lucky to travel or simply know the highest motorable road (18,380 feet) in the world, Khardungla. But, how many of them know about the bridge that takes you to the other side of the pass? Hardly few. Well, here is another one for the great Indian army.

It was around the year 1982, when troops of the army started with the construction of a bridge that would run over, what was a glaciated patch of hard frozen rice, right ahead the Khardungla pass. Known as the Baily Bridge, it is located between the Dras and the Suru River at Khardungla pass and is the highest bridge in the world.

It was built to facilitate travel to the other high altitudes of Ladakh, and today it still stands strong, bearing the load of hundreds of army trucks and tourist vehicles on its shoulders. Unfortunately, 18 men lost their lives in the construction of the bridge.

9. The Tradition of The Order

Synonymous with Buddhist monasteries, Ladakh has monks in hundreds associated with these religious spots. These red clad peace loving monks are of every age. As per one compulsive tradition of Ladakh, the youngest child of a family would be bounded to join a monastery as per his sect and live life like a monk.

This practice was very much in common in the years of the past, but now it rarely happens. Although the region is not short of teens willing to voluntarily join the monasteries as per the order.

Monasteries located entirely on the edge of a cliff are some of the usual sights that you can have in Ladakh. One such structure is the Karsha Gompa which has a collection of 30 buildings built all on a vertical climb. All these buildings, whether the prayer halls, libraries or living quarters are places where 120 monks get their routine indulgences, and to call all of them for lunch and dinner can be quite a task, if you do not have an effective medium.

For that, the monastery makes use a conch shell. Every afternoon and evening, this conch shell is blown, and it resonates the whole of the monastery. The lamas or the Buddhist monks call it the call for food.

Located in the Shey region of Ladakh is a structure that can withstand the most hostile weather conditions and still stand unaffected. Known as the Druk White Lotus School, it was set up to instil rich cultural traditions in the students. Interesting fact about the property is that local building materials and techniques are used in the construction of it.

Considering various possibilities of extreme weather conditions that Ladakh faces, an environmental design has been chosen for the school. This sustainable design has also won the school an international reputation.

12. Where the Snake King Slept

One of the most significant and important monasteries in Ladakh, Likir is situated at a hilltop. Besides the religious significance, the monastery is popular for a different reason as well. Buddhists believe that the monastery was the place where the snake king Jokpo once slept. Infact, naming of the monastery itself signifies its association with the snake king. Likir is derived from the word Lukhgil, which means ‘coiled snake’. Monks believe that the sacred monastery is under the guard of the spirits of two legendary snakes-Nanda and Taksako.


About the Author :Love to travel! But confused how to. Well, Ankit Kumar has answers to all of your queries. A travel writer by profession, Ankit offers all the necessary information on travel to your favorite holiday destination through his write-ups. So just read on!!.
Read More
Newer Posts Older Posts Home