Luxury Trains of India - How to See India by Rail 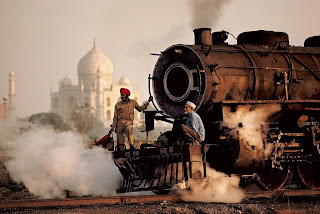 It will be no exaggeration to call India, one of the most well-known holiday destinations, all across the world.  From past few years, it has also emerged as a luxury destination amidst discerning travelers. India has as many as 6 luxury trains and 2 heritage trains that no other country can boast of. By going on-board on any of these trains, you have an unforgettable experience. Travelling on-board these trains is becoming extremely popular from past few years. In a luxurious setting, you avail every world-class facility. Here is a list of the luxury trains of India: 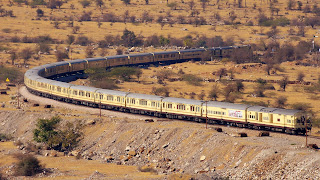 The oldest and the most popular luxury train of India, the Palace on Wheels began its operations in 1982. Voted as the 4th best luxury train in the world, Palace on Wheels offers you a chance to explore the very well-known state of Rajasthan. This week-long journey takes you to popular cities such as Delhi, Jaipur, Sawai Madhopur, Udaipur, Jaisalmer, Jodhpur, Bharatpur and Agra. The train has 14 guest carriages, each getting its name from the erstwhile princely states of Rajasthan. You relish sumptuous delicacies of Indian and other world cuisines in its 2 multi-cuisine restaurants. The train also has a lounge area. It departs every Wednesday from Delhi’s Safdurjung railway station.Read More 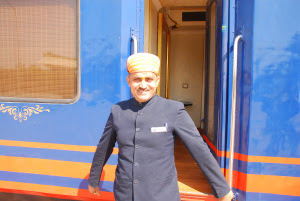 Beginning its journey in January 2009, the Royal Rajasthan on Wheels has become the most luxurious train of India. Throughout its journey, the train offers you a chance to visit some very well-known destinations of India. Royal Rajasthan on Wheels, departs from Sundays from Delhi and then goes to Jaipur, Jaisalmer, Jodhpur, Sawai Madhopur (Ranthambore), Chittorgarh, Udaipur, Bharatpur and Agra. The coaches of the train get their name from name of gem stones.  It has 2 super deluxe suites, 13 deluxe cabins, 2 multi-cuisine restaurants, a lounge and a spa.Read More 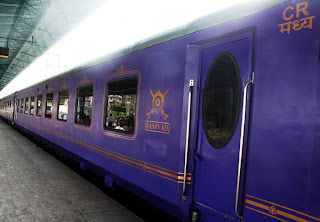 The Deccan Odyssey, popular as the Blue Limousine, offers you a chance to visit the well-known destinations of the state of Maharashtra along with Goa. Beginning its journey in 2002, this train offers you a chance to visit well-known places like Mumbai, Sindhudurg, Goa, Kolhapur, Daulatabad, Chandrapur, Ajanta Caves, and Nashik. Deccan Odyssey has a total of 21 coaches out of which 13 are for the guests. The train also boasts of housing a Spa, Presidential suites, Gymnasium, business facilities, fine dining restaurants and a bar. 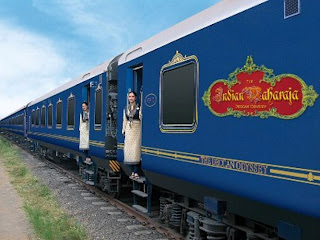 The Indian Maharaja began operating in November 2009.  A 7 night and 8 day journey on board this Indian luxury train takes you through well-known destinations of India including Mumbai, Aurangabad, Udaipur, Sawai Madhopur (Ranthambore), Jaipur, Bharatpur, Agra, Fatehpur Sikri and Delhi. The train has a total of 21 coaches, including 11 passenger cars, 2 presidential suite cars, two restaurant cars, a library, a lounge car, a spa, a conference car, gym, and beauty parlor. The train offers 2 journeys, one starting from every Wednesday from Delhi to Mumbai, the other being its reverse beginning from Chatrapati Shivaji Rail terminus in Mumbai. 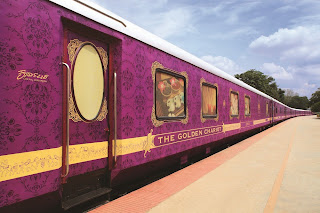 Golden Chariot is a luxury train, embarking on a luxurious voyage of discovery through the cradle of stone architecture. This supremely luxury caravan is named after the famous stone chariot in Hampi, a world heritage site in Southern India. The colorful 8 days and 7 nights journey is scheduled every Monday from Bengaluru and traverses through Mysore continuing to  Shravanabelagola, Halebidu, Hampi and thereafter entering into the triangular heritage site of Badami, Pattadakal, Aihole and finally visiting the golden beaches of Goa before ending in Bangalore. There is another route which the guest might be interested in - Southern Splendor, an expansion of “The Pride of South” that incorporates Tamil Nadu and Kerala.

This luxury voyage features two restaurants, gym, spa and a lounge bar. Each of the Golden chariot’s carriage is named after the dynasties that ruled Karnataka. Another highlight to eye upon is the on board performance by local artists in the train's Madira Lounge Bar, the interior of which has been designed as a replica of the Mysore Palace. 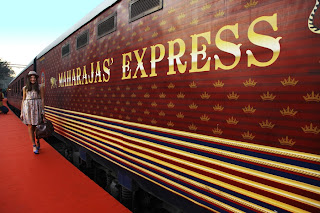 Maharajas' Express luxury train is the latest luxury train in India. This luxury train was also voted World's Leading Luxury Train at World Travel Awards 2012.  Maharajas' Express offers a total of 5 train journeys which include 3 weeklong journeys and 2 short itineraries.  What differentiates Maharajas' Express from other luxury trains of India is the exclusive experiences arranged for the guests at several destinations. Be it the Exhibition Elephant Polo Match, Sundowner Cocktail in snad dunes along with folk dance performances, heritage walks or the royal dining in palaces, each of this experience are included to offer an authentic experience of royal lifestyle of erstwhile maharajas of India.

This luxury train features a total of 23 coaches, with four diverse configurations. There are two suite carriages, five deluxe carriages, six junior suite carriages and one presidential suite exclusively in one carriage. The other facilities that are a sure highlight of this train include two fine dining restaurants, one bar, and an observation lounge with its own bar, game tables and comfortable club. Check out the Maharajas' Express Treasures of India Journey.

Fairy Queen Train - a steam locomotive is the oldest luxury train in India built in 1855. The train tracks from New Delhi to Alwar. In year 1972 the train was declared as heritage and was its name was enclosed in the list of luxurious trains of India by the Indian Government. The train was completely renovated and resumed its commercial operation in 1997 as a circuit train that runs between Delhi to Alwar.  The train has also been bestowed with an honor by the Guinness Book of World records to be certified as the oldest   working locomotive.

The train has only two coaches attached to it and features a well maintained pantry car to take care of the onboard catering services. Another highlight of the train includes is the lounge in the front of the passenger coach. Its large window offers a beautiful view of the Fairy Queen engine as it puffs away and steams across the countryside of Rajasthan on its way to Alwar. Read More

The Mahaparinirvana Express Train is the first Buddhist tourist train of India which travels through various enchanting destinations offering rich Buddhist heritage. This luxury train caravan offers a journey spanning over 8 days and 7 nights across various world renowned Buddhist destinations present in India and Nepal. The destinations covered during this week long sojourn covers Lumbini, Bodhgaya, Sarnath and Kushinagar. All the over mentioned destinations mark a great relevance in the life of Lord Buddha.