One of the best places to visit in Madhya Pradesh, Gwalior Fort is one of the oldest and resplendent fortresses in India. The fort came into prominence around 8th century under the rule of Rajput Tomar kings. This sprawling hill fort houses several structures of note that include 2 palaces, several temples and water tanks.

The fort's rule changed several hands that include Rajputs, Mamluks, Suris, Mughals, Marathas and British. To get a peek into the turbulent history and legends associated with Gwalior Fort, do attend the Son et Lumiere which is held every night at the open air amphitheater inside the fort complex.

Location: Seated at the hilltop, around 100 meters above the city level, the fort  is around 7 km from the Gwalior railway station.

Built by: The fort is believed to have been built by Raja Man Singh Tomar, however, in the course of five hundred years the fort went from one ruler to another.

Built in: Gwalior Fort was built in the 8th-century.

Highlights: The fort consists of three temples, six palaces and numerous water tanks. It is 35 feet high and is about 2 miles in length.

How to reach: One can easily get to the fort from the city by bus, taxi, auto, rickshaw or even by walking if there is time.

Standing on a steep mass of sandstone, Gwalior fort gives a clear view of the east of Gwalior. The fort comprises of two main palaces: Man Mandir and Gujari Mahal. Besides the main two palaces there are other recommended places like the Man Singh Palace, Jauhar Kund, Jahangir Mahal, Sahahjahan Mahal and more. The temples and the monuments are of different religion mostly Hindu and Jain. 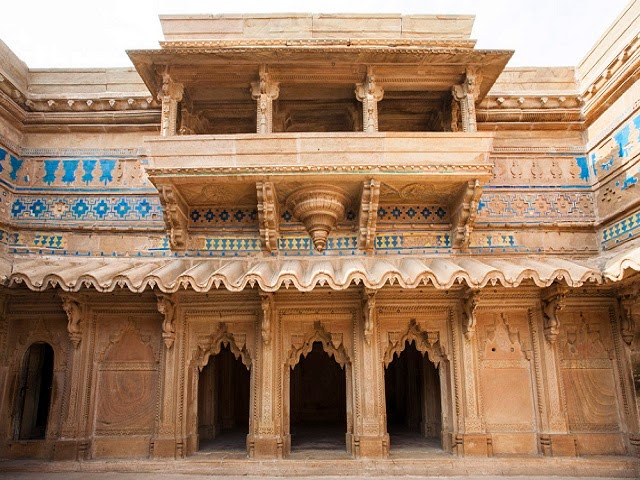 The fort’s dramatic entrance named the Hathi pul (elephant gate) is on the eastern side. A steep road winds upwards to the Fort, and along the way there are Jain sculptures cut into the rock which is well worth the climb.

Gwalior's history is traced back to a legend. In 8 A.D, a chieftain called Suraj Sen was stricken by leprosy. Hermit saint, Gwalipa, cured him and in gratitude the chieftain founded the city which he named after the saint who had given him the gift of new life. 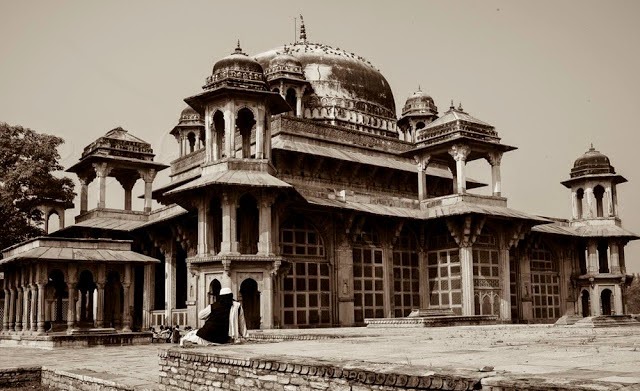 Over the centuries the city has been captured by many dynasties when slowly it became popular. The different rulers in the city brought about diversity and a new taste each time, which is evident in the architecture and designs till today.

The earliest record of the fort is  525 AD where it is mentioned in an inscription in the temple of the Hun. The fort was made to serve as a prison by the Mughals.

It is believed that the Gujari Mahal is a momento of Raja Mansingh Tomar’s love for his Gujar Queen, Mrignayani. The palace is made beautifully and so is the other palace, Man Mandir with its outer walls are distinctively decorated with blue mosaic tiles and rows of yellow ducks.

The fort is a prominent landmark of the city as it stands upright and broad, it has served the purpose well during the times of battles, imprisonments and jauhars.