In Mandu Travel Guide, Monsoon Destinations in India, Places to visit in India during Monsoon, Things to do in Madhya Pradesh by Unknown // // Leave a Comment

Mandu - The City Of Joy

“I know of no place so pleasant in climate and so pretty in scenery as Mandu during the rains.” ~ Emperor Jahangir.

In this "City of Joy", the lyrical voice of Rani Roopmati across the Narmada recalls the noble love tales of Baz Bahadur and Rani Rupmati.

The fortress of joy, Mandu is located at an elevation of 634 m in the Vindhya Range. The fortress is enclosed in the 37 km long battlements. In this well-defended plateau, one could find the wealth of palaces, mansions, pleasure pavilions, mosques and tombs. Thus, Mandu showcases structures that are considered as fine specimens of Afghan style of architecture.

During monsoon, the hill range of Mandu is at its best in natural scenery. The entire area is covered in lush greenery with number of torrents and brooks, gushing down into the narrow valley. The beauty of the place is further enhanced by numerous ponds and lakes dotted across.

Every structure in Mandu is an architectural gem and these were built in the duration of hardly 125 years, i.e., between 1401 A.D to 1526 A.D. Structures such as massive Jami Massjid and Hoshang Shah’s tomb have also been an inspiration for the designing of glorious Taj Mahal.

History:
In the 10th century, Mandu was founded by Raja Bhoj and later in 1304, was occupied by the Muslim rulers of Delhi. In 1401, when the Mughals occupied Delhi, the governor of Malwa, Afghan Dilawar Khan, located his own little kingdom and subsequently golden era of Mandu began.

Mandu was established as an independent kingdom by Dilawar Khan, but it was his son, Hoshang Shah, who made efforts and shifted the capital to Mandu from Dhar. The legacy then was ruled by Hoshang’s son Mohammed, for one year and then was poisoned by the militaristic Mohammed Khalji, who thereafter ruled Mandu for 33 years.

In 1469, Mohammed Khalji was succeeded by his son Ghiyas-ud-din, who ruled for next 31 years. Thereafter, he was poisoned by his son Nasir-ud-din at the age of 80.

Bahadur Shah of Gujarat occupied Mandu in the year 1526. In 1534, Mandu was reoccupied by Mallu Khan after ousting Mughal prince Humayun. After 10 more years of invasions and feuds, Baz Bahadur emerged as the ruler of Mandu. But, later in 1561, Baz Bahadur fled Mandu instead of facing advancing troops of Akbar.

Mandu, after being added to the Mughal Empire, was considered as a significant degree of independence. In 1732, Mandu was occupied by the Marathas. Thereafter, the capital of Malwa was again shifted back to Dhar, and the fall in fortunes of Mandu had begun with the running away of Baz Bahadur, which became a drop. 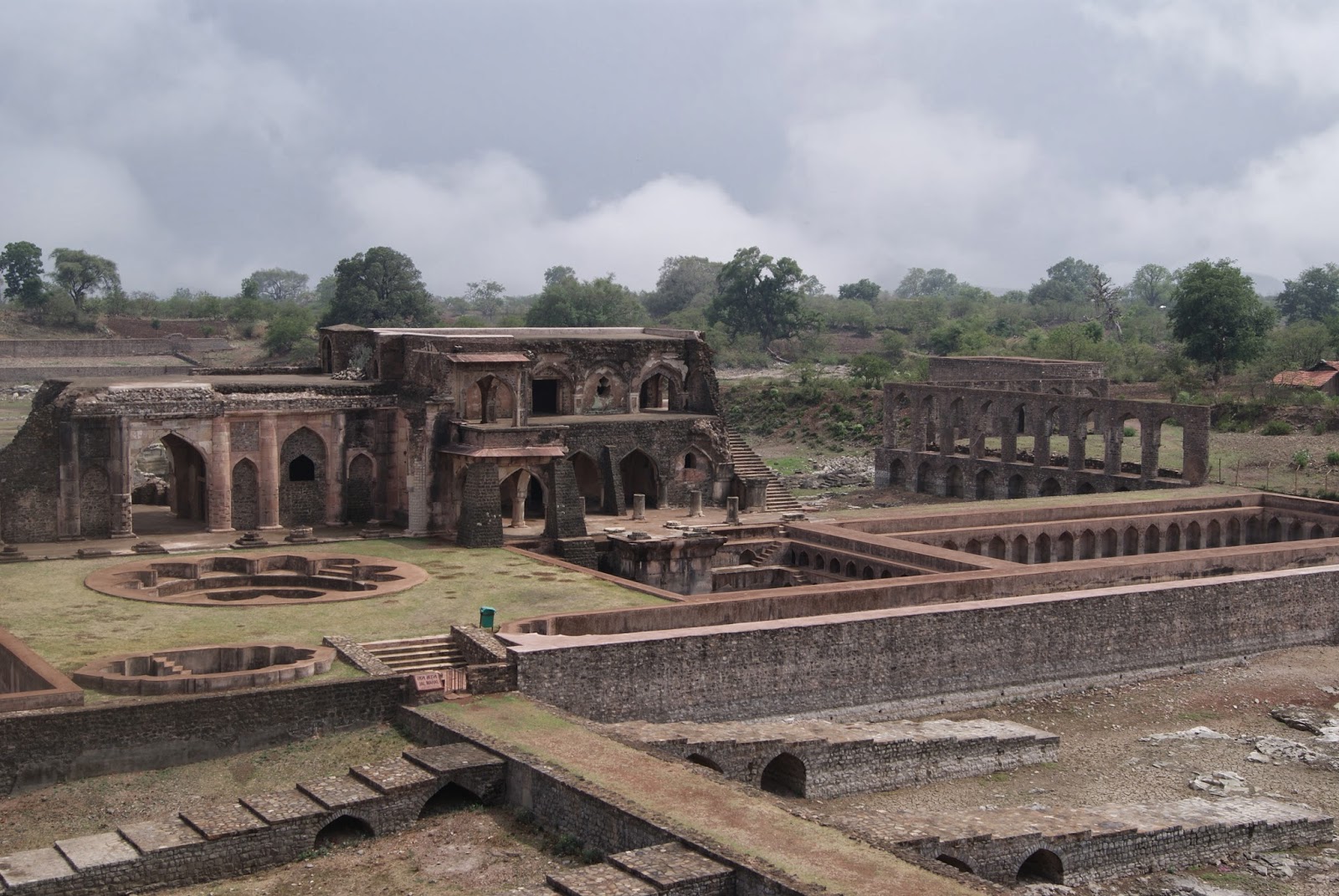 Attractions:
Splendid Palaces, mosques, monuments and tombs mark the identity of Mandu. These attractions are broadly categorized into three groups, namely, The Royal Enclave, Rewa Kund Group, and the Village Group. The entry to any of these groups requires a nominal fee of INR 100 and INR 5 for foreigners and Indians respectively. Apart from this, there are smaller ruins dotted across other regions of Mandu.

Travel Tip:
Mandu (Madhya Pradesh) is an ideal destination for the visitors looking for peace and relaxation. The best way to explore the place is cycling; cycles are easily available on rent. It is advised to plan a leisure trip of 3 or 4 days to explore Mandu. Mandu's picturesque beauty is at full bloom during monsoon making it one of the best places to visit in India during monsoon.

Side Trip:
The visitors can plan to visit the Bagh Caves, situated on the bank of River Baghini at a distance of 50 km from Mandu. These caves, date back to the 5th-6th centuries AD, are a series of 7 Buddhist rock cut caves. The exquisite murals and sculptures make this attraction worth a visit. On a one day trip, you can also visit Maheshwar, the Varanasi of Central India.