One of the most ancient temples of India, Somnath temple or the Somnath Mahadev Temple enjoys a favourable location in the west Indian state of Gujarat. Around 79 km from Junagadh district,  this renowned temple lies on the country’s western coast.

This temple that has survived the tests of time, holds a lot of importance for the followers of the Hindu religion. The history states that this temple was looted of its wealth and structure by several conquerors. There are various stories about the origin and subsistence of the temple.

Location - 79 kilometres from Junagadh in the Prabhas Kshetra near Veraval

How to Reach Somnath

By Road: Somnath is 79 km from Junagadh and 25 km from Chorwad. State-run  buses and private luxury coaches are available from several places in Gujarat to Somnath.

By Rail: Somnath is located at a distance of 6 km from the nearest railway station placed at Veraval

By Air: The nearest domestic airports are at Koshed (55 km; 31 mi) and Diu (90 km; 56 mi). Connecting flights to Diu are available from Mumbai (Sahar International Airport) and Ahmedabad. Taxi fare from Diu to Somnath is roughly 2000 INR.

Also known as Prabhas Pattan, Deo Pattan or Somnath Pattan, this temple is an excellent example of typical ancient temple architecture of India. It was famed for being a treasure of wealth, which was looted by Muslim rulers from 11th to 18th century. Being one of the 12 Jyotirlingas, it is considered to be one of the popular religious sites of the followers of Hinduism and Lord Shiva.

Renowned as a timeless shrine, it is every year visited by a decent number of devotees from all around the country. If the legends are to be believed, during the ancient times revenue was collected from the nearby 10,000 villages for the maintenance of the Somnath temple.

History of the Somnath Temple

It is believed that originally the Somnath Temple was built by Moon God Soma in gold, by Ravana of epic Ramayana in Silver, in wood by Lord Krishna  and then during the 11th century in stone by Solanki Rajput rulers.

The present structure is 7th reconstruction that was done in the year 1951 by Sardar Vallabhbhai Patel. The riches of this temple invited several invasions but after every invasion, the temple was given back its glory by one or the other Hindu devotee or devotees. 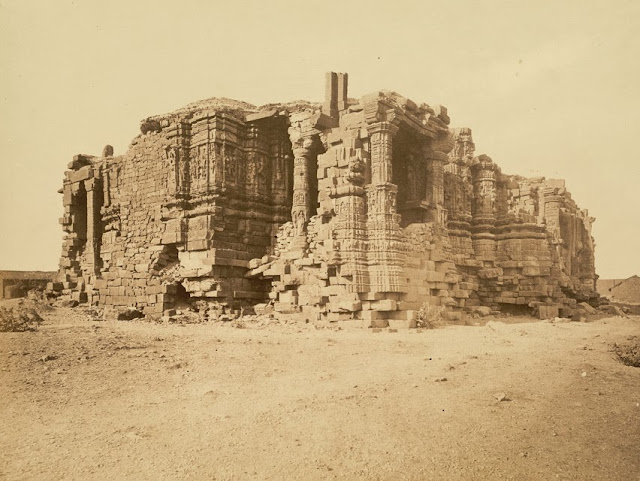 Considered one of the top 10 temples in India, Somnath is erected in the Chalukyan architecture style or Kailash Mahameru Prasad Style with 50 m tall Shikhara, forming a beautiful sight with the view of the Arabian sea and the tip of the Saurashtra peninsula.

This magnificent temple consists of silver doors, a Nandi bull idol, delicate detailed carvings and the main Shivlinga. A huge mandapa or hall and the main temple are placed in the enormous courtyard.

Some interesting facts about Somnath

Also check out the Top 10 Heritage Caves Temples of India?

Contributed by by Geetika Handa