A Trip to Bangalore aboard Golden Chariot Train 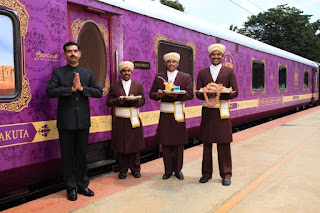 ‘A voyage to the many world’s of Karnataka’; this is the best one liner to describe the Pride of the South journey offered by the Golden Chariot train in a nutshell. Launched with the joint initiative of Karnataka State Tourism and Development Corporation (KSTDC) and the Indian Railways, Golden Chariot embarked on its maiden voyage on 10th March, 2008. The train has been listed as the ‘Seven Best Luxury Rail Journeys in the World’ by Vanity Fair Magazine for its  flawless services and state of the art facilities.

1 - A high tea experience at the Taj West End hotel for the guests who’ve opted for the Pride of the South journey.

3 - Alternatively, you have a choice to visit the Our Native Village for an eco-vacation. It is a 100% eco-friendly resort where you can savor a sumptuous lunch and explore the in-house organic farms and be a spectator to the specially organized cultural extravaganza. Here you can take a slice of the rural lifestyle.

4 - By 2000 hours, you will  be required to report at the Yeshwanthpur Railway Station to board the train.

5 - After a traditional welcome, you’ll be ushered to your respective cabins and the train will start rolling towards Kabini.

I agree that the first day excursion is quite short, restricted to few hours but still enables a sneak peek into the rural lifestyle prevailing in the modern hub of Bangalore along with a dash of art and culture.